I have been noticing lately how me and other women inoculate ourselves against misogyny. In my case it has been trying to make arguments palatable, not to offend or harm, to bring people (mainly men) with me on the journey to build gender equity and parity.  But there are days where this just isn’t possible. Days when I feel so outraged at the harm of misogyny to women, but actually for all people. Afterall when half the planet is diminished, we are all diminished. The social construct of gender continues to dominate and reinforce a hetero-centric worldview. I had a moment of being tipped over the edge this week when I was asked what I thought the root cause of the low number of women entrepreneurs was in my State, as if there was one cause and as if it is a linear matter. (I have written about my response elsewhere.) It was inevitable that the word patriarchy came out of my mouth, if I was forced to give a single root cause. It has been a long time since I have used the word patriarchy in the public domain and I felt like I was betraying my persuasive powers to use that language – but really there is no other word. And while patriarchy is the theory, misogyny is the practice.

Misogyny shows up in the way women are excluded, invisible and disappeared in the social and economic narratives. A panel of nine men, hosted by a government department is explained as we asked a woman and she wasn’t available.  The low number of women applying for opportunities to build business and wealth is explained as there just aren’t enough women ready for this program.  The lack of women in parliament is explained as women aren’t tough enough for the the rough and tumble of politics.  Yet it is women’s work, paid and unpaid, invisible, not counted that enabled the men to get their start up going while their female partners toiled to keep the homefires going; the legendary voice of Australia’s first female Prime Minister who said enough is enough to her opposition counterpart and let it rip in 2012, and it is as relevant today as it was then.

I notice how often I am scared of sending sparks flying by speaking truth to power. I notice that when I am bold enough to do that, how this emboldens others. I notice when I use the word patriarchy, misogyny turns up, ugly, gnarly, aged and infused with the power of generations.  I notice there are surprises too – people, especially men younger than me, being embarrassed of their own kind, and speaking up not for me but for the cause, genuinely being upstanders not bystanders. I notice that helps me get a little more brave to do it again.  I notice women feeling encouraged and inspired and urging me to do more. This gives me more courage too.

Misogyny is sometimes like a wolf in sheep’s clothing. What looks inclusive – like having 2 women on a 4 person panel (chaired by a man) – ends up being tokenistic – when one man speak for more time than all the women put together (I have started timing this on panels I am asked onto).  What looks engaging and holds promise of support turns out to be little more than a gesture.  Have you ever noticed the man who is always punctual for appointments with men and generally late for appointments with women? Have you noticed the funny, flirtatious man morphing into an aggressive competitor as soon as a woman starts to do better than him?  How about the man who presents in public as the loyal, devoted husband and father who shares the chores in the house, who is a secret adulterer? How about the man who takes up two seats on the train, mansplaying and mansplaining seem to have the same root cause to me.

Cheers to the men who act in solidarity. Thank you. Can you bring a few more bros with you, because I am over it, and need you to do that work?

You can expect to hear me using the words patriarchy and misogyny more often, because it is time for more sparks to fly. 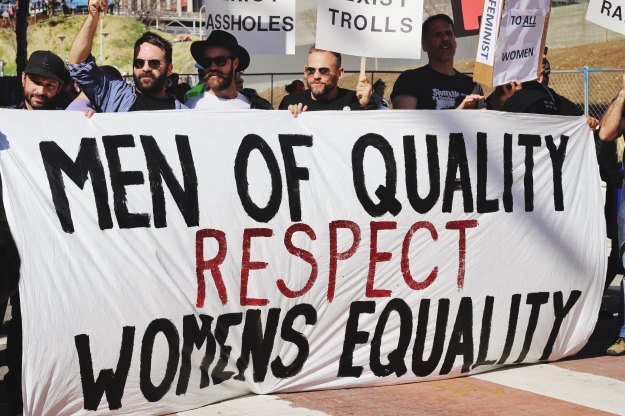 Photo by Samantha Sophia on Unsplash

Love to read your response to this post Cancel reply